When training for the vertical jump we want to increase our power production and our rate of coordination. Doing this, we have to think about being rigid and explosive, both bilaterally and unilaterally.

Once we get into the workout, we have to figure out how to get the nervous system chugging and how we can get our muscles wide awake like an energy drink at five PM. That’s where our first exercise comes into play.

We want to do a slow quarter squat, a solid two-count during the eccentric works fine. We then want to drive up quickly. Think of the drive up as a flat-footed jump without necessarily jumping. Do this for three to four sets of four to five reps.

This movement is great to feel nice tension in the trunk, feel the quads, and feel the posterior chain coordinating together.

Again, using the PowerLastic bands, we want to wrap the bands around the feet and the neck. We want to do three jumps with a good rigid, reaction. We want a solid counter-movement. Try to get to a solid height while jumping. Another benefit is that the arms aren’t used, which will allow us to feel really explosive when we use our arms.

We will then rest for about thirty seconds before performing the next movement as a pair.

This movement is done over hurdles. It is done by being trained from the left and right sides. We want to jump over the hurdles by jumping off a single leg as if galloping and landing upon the opposite leg that was not galloped off of. Repeat this through the hurdles with each leg leading. 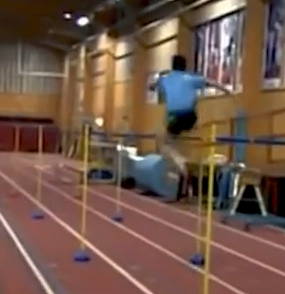 We want to complete this movement over at least three hurdles with each leg. We can do a total of five sets of banded squat jump and Holm hurdle hops/power gallops.

Remember, bilateral and unilateral help us become explosive from every single position. We want to light our nervous system up and train it to recruit as effectively as possible. In addition, we want to train joint integrity and joint stiffness so that we can react very, very quickly.

The high position Gwiz jump into mini hurdle hops is a unilateral movement. We want to use an elevation of six to eight inches with a pad on top of the raise. We want knee flexion on the back foot up. Only the knee is on the pad. The lead leg, the leg that will be jumping, will be just above 90 degrees. From this position, be explosive and bound over the hurdles. 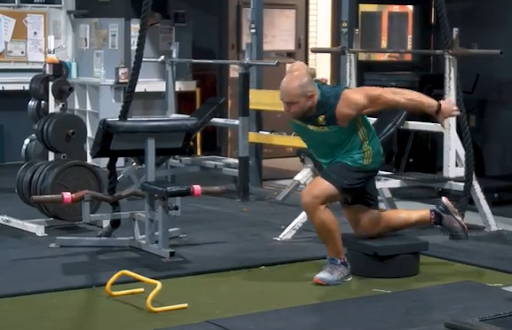 We want to do the jumps on both sides before resting for about thirty seconds before pairing it with the next movement.

This is a bilateral jump that involves a rotation. It is an easier movement than the Gwiz mini hurdle hops. The idea is similar to a basketball player rotating to perform a dunk. With the body perpendicular, we want to jump and, while in the air, rotate ninety degrees before landing on the box. Do this movement from side to side.

Remember when performing the descent jump off the box to have the body perpendicular with the box to force a ninety-degree turn when rebounding and jumping onto the box again. This trains the body how to bilaterally jump and rotate at the same time.

Perform two to three sets of four to six jumps.

Realize that when we are training the vertical jump, we need to give the body and nervous system time to recoverbetween sets, exercises, and exercise pairings. Two to three minutes is plenty. These movements are high intensity, demanding rapid muscular actions. Recovery is important to help our jumps to be technically sound.

The last thing we like to utilize when working on vertical jump-based training is using a very hard movement that is going to be very explosive while demanding us to ground and absorb as much force as possible.

To do the depth drop into hurdle hop, we will simply step off the box (12-18” is plenty high enough), land on both feet simultaneously and, with great elasticity, spring up and over the hurdle.

A key factor to remember is that the first drop needs to mimic the counter-movement that is performed when doing a vertical jump. The second key factor is after landing from the jump over the hurdle is to stop and hold the landing in almost the exact same position as the counter-movement. Being able to stop and control that position greatly helps improve the turnaround phase, the amortization phase, in the vertical jump.

Do four or five sets for two to three reps. Each set it is okay to raise the hurdle higher and higher. But play the long game. After a couple of weeks of doing this workout once a week, the hurdle will be pretty high. The whole goal is to raise the level of the hips. We want our hip height to keep growing off of the counter-movement.

Utilize this entire workout about once a week. Make sure to gauge the rest accordingly so the quality of the reps is optimal. These movements do work. We have developed athletes with these above movements to tremendous vertical leap heights. For instance, we have athletes with 44” vertical leaps doing this workout routinely. The proof is in the leaping! Go ahead, give the workout a try, and comment below with the vertical leap gains.