How To Increase Vertical Jump

A lot of the components come down to the athlete being strong, mobile, and explosive. This requires the athlete to perform strength work, explosive work, Olympic lifting, and ballistic movements that require moving weights rapidly. The training can tend to get muddy and coaches and athletes can struggle to put together a full-blown system that will help improve the vertical jump.

One of the keys behind improving the vertical jump we have found at Garage Strength is training really unique unilateral movements. Let’s take a look at a few.

This is a pretty difficult movement. We do not recommend starting off with a single-leg squat loading the bar up and going crazy heavy. This is a movement that we can start nice and easy because the heel will not be supported.

Through training in the unilateral position, we will be able to increase structural integrity. Being able to function a little more efficiently in a contralateral perspective, we can better maintain the health of the body to keep increasing power production.

We like this movement to be done nice and easy. The leg that we are squatting with will be on a plate so the heel is unsupported. The back leg will be put up on the single-leg pad. Squat down and get a nice rhythm going. Make sure the front foot’s ankle is stiff and holding the position. Holding the position forces the rhythm to be generated that forces more effective recruitment throughout the posterior chain.

This movement can be used as a warm-up to the really, really ballistic movements. It can be done for four to five sets with just the bar. The key is to make sure the heel is staying elevated and not dropping below the plate; holding the ankle nice and stiff will help with more effective recruitment when executing the vertical jump.

We love this movement because it forces the athlete to understand their counter-movement so that they have a bigger vertical jump. On top of that, it takes the hands out of the equation, forcing the entire lower body to coordinate with the trunk to become more reactive.

We attach the bands to the sled or heavy dumbbells. We grip the bands and hold them so that they drape over the shoulders and are pinned to the chest with the fisted grip. We want to see a six-to-eight-inch counter movement with an explosive jump. We want to react as soon as we ground. That will help us become more reactive and explosive. It will also teach the body the depth it needs to be in to react rapidly. Since the bands are pulling us back down, the load is higher and it helps the nervous system to recruit a little more effectively. 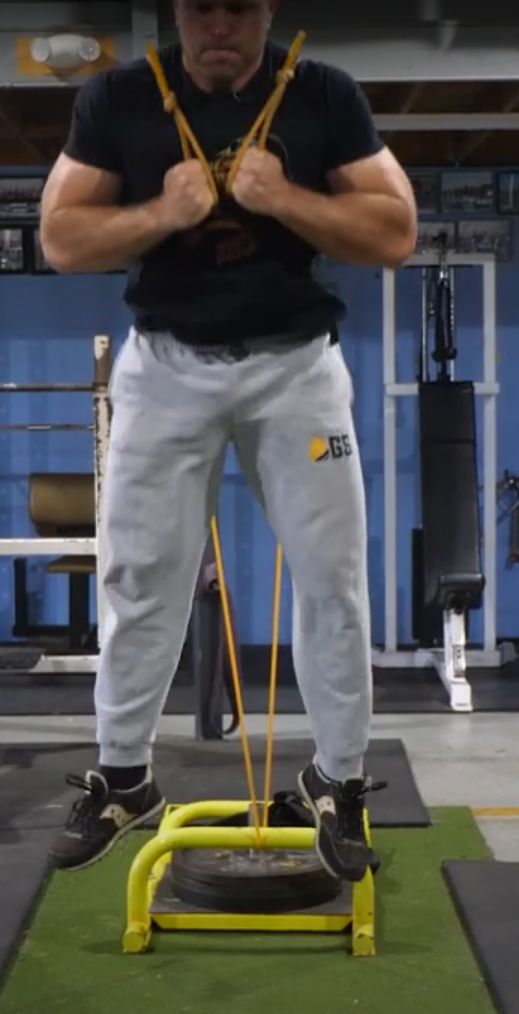 Alternatively, we like to have athletes quarter squat and jump with an empty barbell on the back. Again, this is a difficult movement. It is loaded so we need to be strong enough and coordinated enough to handle it. Nice and stiff on the landing with no stutter step on the landing.

This is a series of three jumps. The reason we love this series of jumps is it teaches, right off the bat, to utilize the counter-movement for the launch over the first hurdle. Approaching the second high hurdle, the slight counter movement helps us mimic the skill position needed when executing the vertical jump test.

The mini hurdle in the middle is there to create an easier second jump so that when landing the body is trained in the skill and technique that is needed to jump high. One issue is that the hurdles require us to go forward. Keeping the hurdles tighter will help with the transfer to the vertical jump better; however, starting out a little bit wider will make it easier to execute until the technique improves to the point where the nervous system fires appropriately to move the hurdles closer.

Perform this movement at max twice a week. As a beginner, do the movement once a week until the legs are strong enough, the body can handle the muscle recruitment and grounding position, and the body understands how to optimize and utilize the ground reaction forces. This jump series will blow up the vertical jump.

The plate jump is a simple bodyweight jump that takes the arms out of the equation. This causes the legs and trunk to recruit more effectively. The movement is also slightly overloaded, so when the plate is dropped, well-trained athletes can get into the stair jumps immediately. Less trained athletes will need a twenty-second break or at least a breath to eye the steps up.

One final, key factor when trying to improve the vertical jump means we will be doing a little more jumping that can beat the body up. To a point (at least if we are not periodizing properly). However, when we are doing stair jumps the eccentric load is much less when grounding. This makes it easier on the body while still demanding the body coordinate rapidly. 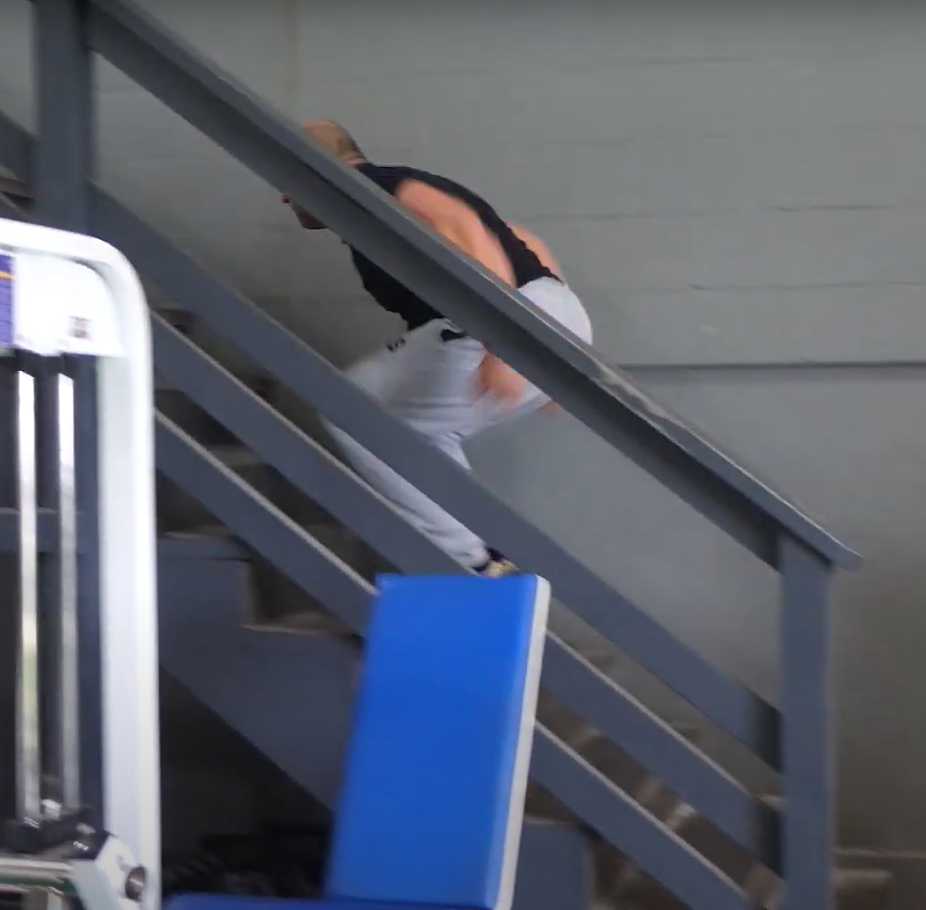 Go ahead, grab a plate, and perform four jumps. Then bound up the steps (maybe about twelve total) in a series of jumps. Ideally, the stairs are bounded up in three jumps. A key factor when jumping up the steps is landing with a knee angle greater than ninety degrees. If the hips are sinking too deep in the landing try to fix it. Jump more aggressively or focus on hitting the quarter squat position.

Also, don’t be an ogre when landing. Landing heavy means a lack of absorption transpiring. Athletes who listen and are perceptive to auditory stimuli will benefit greatly from such feedback.

Improving the vertical jump requires jumping. We know it sounds obvious but the basics need to be stated. Improving the stiffness of the ankle to create a firm take-off helps. Adding resistance with bands and holding weight assists the body in coordination as well. The body also needs to jump in manners that train the counter-movement, demand reactionary ground forces, and are periodized in a manner that doesn’t deplete the body in a manner that it can’t perform as desired. With all that in mind, go ahead and use these four exercises to defy gravity even more forcefully.