Becoming a faster sprinter requires being explosive. There are often times in the sport of sprinting where athletes feel there is nothing that can be done to drop their times. They think that they have done everything. They’ve improved their technique; they’ve added volume to their training; they’ve reduced volume in their training to feel fresh and tapered. Still, they’re not lowering their time. The sprinters get frustrated, feeling like they’re banging their head against the wall and getting nothing but a headache and frustration.

We are going to provide a simple breakdown of how Garage Strength looks at training sprinters and provide everyone with five takeaways. A lens, or a microscope, to see how to focus on different tasks to improve a sprinters capabilities on the track.

The stronger an athlete’s foot is, the more explosive they can be and the more proprioception they can have communicating between the ground and the body with tactile feedback. A stronger foot also allows for more stability and rigidness in the ankle joint.

At Garage Strength, when dealing with speed based training, like sprinting, we put a strong emphasis on foot strength. Athletes that have strong feet and strong toes can manage to generate a little bit more force into the ground to move just a bit faster.

An exercise we utilize to address this is the Hinge Lunge. We like to do a lot of footwork on a PVC pipe. Doing work on a PVC pipe helps athletes improve balance, stability, and getting the toes to function similar to our fingers. Now the Hinge Lunge is a very difficult movement. We want to see the PVC pipe resting almost under the bridge of the foot with the toes over-top. This exercise drastically improves the integrity of an athlete’s achilles tendon. It also greatly improves the strength of the toes to grip and grab. The movement forces the toes to grab with toes to keep the PVC locked in place.

The Hinge Lunge will help a sprinter a ton during the drive phase and right out of the block. The movement mimics what the sprinter needs to do and the force they need to apply during the before mentioned phases of the sprinting event. Do this movement as a warm up, two to three days a week for three sets of seven reps on each leg. Focus on how the toes are behaving and the feeling through the achilles. Understanding the whole goal is to strengthen the foot is important.

Being explosive and fast out of the blocks is important. A movement we recommend is the power clean on command. We want to see strength coaches with their sprinters in the gym giving a command as to when the athlete needs to perform the clean. The idea is to mimic the starting shot from the blocks. The power clean on command preps the body to hold the appropriate tension in anticipation of the command. The command signal then requires the athlete to explode to perform the lift as if accelerating off the block. 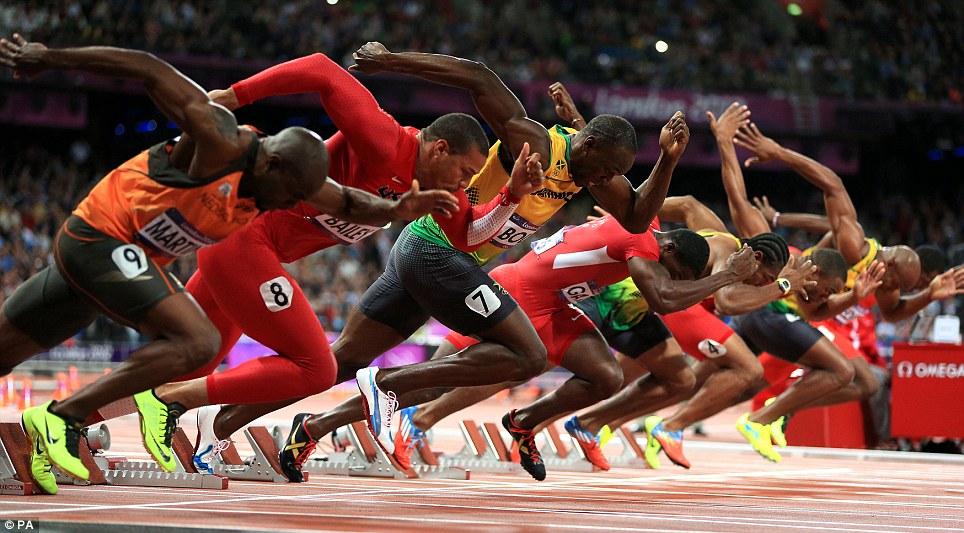 Resistant coaches to this movement must acknowledge that sprinting is a technical sport. Sprinters have to apply a ton of force through technical execution. The power clean on command is a technical movement that requires a ton of force through technical execution from an auditory response. The athlete is being trained in multiple areas. It prepares them for coming off the blocks in the meet and transfers to sport well, especially as the athlete is beginning to peak.

The drive phase is about accelerating as quickly as possible through maximal acceleration. We then want to hold this speed as long as possible to win the race.

Make sure athletes performing this movement are focusing on a full range of motion, getting as deep as possible. The full range of motion will create longer, stronger muscles over a greater range of movement. It will strengthen and mobilize the hips hitting full depth. Focusing on the trunk will also help improve the athlete’s dynamic trunk control, an incredibly important aspect to being fast. At the very least, stronger quads allow for faster acceleration.

Maximal mechanics is when the athlete is running at top end speed. Sprinters want to be more upright and thinking about the technical side of sprinting. The foot needs to be grounding under the hips so there is a really high ground reaction force. Generating a higher ground reaction force is a means to being faster.

We have seen tons of athletes drop their sprinting times by executing the single leg squat more effectively. One way to execute the single leg squat effectively is by hitting a weight rapidly one day of the week with good rhythm and an upright trunk. Another day focus on pushing the weights and intensity by going heavier, then back off and do some speed work.

We can’t say this enough, athletes need to focus on resisting gravity and the bar and keeping that trunk upright. The athlete needs to hold that position as much as possible. Finally, lengthened that front foot so the back knee can touch down on the pad.

The single leg squat is awesome. It not only transfers to maximal mechanics, but it transfers to the drive phase and block work.

Hamstring pulls (or as some people call them, Nordic curls) are the best accessory movement for sprint training.

We love this movement because it makes the athlete train through a long eccentric portion while the athlete holds their hips nice and extended on the pad, then comes up with minimum breaking at the hips so the hamstrings are lengthened and firing rapidly to pull the torso upright.

Putting all this together is important. Footwork, auditory commands into movement, drive phase focus, maximal mechanics integrity, and accessory movements that zone in on strengthening injurious areas to prevent being hobbled. All of these little things being put together will help lead to dropping the time on the stopwatch for faster times in the race.

One of the key components behind sprinting is that we have to have good stability and superior dynamic trunk control. Then a problem we have with some sprint coaches and speed coaches is them being against their athletes getting too muscular or too bulky up top. But then athletes end up running out-of-balance and unable to handle the forces because their upper bodies are pathetically weak.

We want to see a little creativity with this movement. It is okay to get flashy, especially when dealing with sprinters. We want our sprinters to think about pushing their lumbar spine into the bench while retracting their upper back. This can be a little bit hard to do but it can help with coordination.

With the alternating perspective, we can pause in the bottom and alternate which arm is pressing or we can pause in the lockout. Pausing in the lockout will force athletes to squeeze in their obliques, trunk, and drive through the heels to continue to stabilize while still increasing the upper body strength. Because of the alternation, it is a little harder to get really hypertrophic but it will still lead to increase upper body strength.

Do this for two to three sets of five to ten reps on with each arm and superset this movement with the next exercise.

We like to use PowerLastic bands. We want to attach the band to an immovable object. We will loop the band through before performing the movement. Standing steady on the right leg, the band will be held by the right hand. The left leg will be raised backward in the air to demand more balance. We will pull the left leg through into a hip lock while simultaneously performing a row with the right arm. We want to perform the movement to both sides for four to six sets of seven to ten reps to each side.

We want to be cognizant of what the lats and abs are doing while driving through the heel. We will feel a little bit of hamstring tension as well. The whole point is to not twist and rotate all over the place while rowing. We want to be stable with the band. Using the band will create more tension in the lockout position.

We need to keep in mind that we are trying to stimulate trunk control with the upper body when performing these movements.

This movement is a play on a dumbbell floor press. We will put a plate on our shins and hold the equivalent of a dead bug (really advanced forms of this movement can be done holding a hollow body!). We want to hold the plate while pressing from the floor. Squeeze from the trunk and try to focus on holding and stabilizing while getting the elbows all the way to the floor.

Perform four to five sets of ten to fifteen reps. From this movement, we like to superset this with the next exercise.

We are using a similar concept here. We know we can use a plate hanging from a weight belt when performing pull-ups. However, when doing pull-ups with the plate in the toes, using dorsiflexion to hold the plate smokes the abs. This is the key concept when talking about sprint-based mechanics.

These next two movements are great for any athlete who has to learn how to control their trunk.

The idea behind this exercise is to begin by performing a few push-ups. Three is plenty for now. After performing the push-ups, with the feet on furniture sliders, walk the hands forward like a walrus for as many arm steps. Now do four push-ups followed by four steps with the arms. Then do five push-ups and so forth.

The movement is hard. Athletes feel their gut and feel their shoulder girdles stabilizing and becoming stronger. It is paramount to keep the trunk engaged throughout the movement.

Do this movement for four or five sets in whatever creative rep scheme is most appropriate for ability level and superset it with the final exercise we talk about below.

This row is performed on a bench with a dumbbell. Whichever arm we are rowing with we want the same leg on the bench. We want the back leg raised and locked out. Then we row.

Utilize all six of these movements. Take one of these pairs of movements and go to the gym today and try it out and notice how the abs are a little bit sorer.

It is amazing what can be done with the upper body when stimulating dynamic trunk control in conjunction. All of it put together will lead to greater speed on the track, soccer pitch, basketball court, and football field.