How Sprinters Should Olympic Lift

At Garage Strength, we like to look at sprint training from a top-down perspective. We begin by defining what is sprinting, what is needed in sprinting, and what are the elements in sprinting. If these definitions are not established, we can’t ever really be sure if we will be utilizing the right movements.

To begin, we know that we need to have some semblance of vertical force and some semblance of horizontal force dependent upon different points in the sprint. For instance, running at top-end speed requires a tremendous amount of vertical force, meaning the athlete needs to have effective control over their trunk with dynamic trunk control. Dynamic trunk control is a pivotal element in running fast and running at top-end speed with maximal mechanics.

So what is needed?

Sprinters need horizontal and vertical force, rapid rates of coordination, dynamic trunk control, and power out of the blocks with a steep shin along with deep angles in the knee and hips.

That brings us to the Olympic lifts.

At Garage Strength, we even put in variations that we refer to as reflexive Olympic lifts. Movements that will focus on the cross extensor reflex or the stumble reflex that will force the training of a reflex in the human body that also tends to be a skill. The skills can get honed in on and trained in the weight room to help the athlete perform better on the track.

The reason we really like to utilize a power clean with a pause in the catch for sprinting and sprint-based mechanics is that it forces dynamic control.

Now we have seen a lot of sprinters perform this movement by just pulling off the floor and never make contact with the bar. The problem with this is that the sprinting athletes never achieve hip extension. They never come through while their feet are flat-footed. They never really load their posterior chain very well, so they might even have their knees staying forward with the pull off the floor leading to what is almost like a muscle clean. Sprinters need to be making contact in a power clean to better train utilization of the hamstrings to help athletes run more effectively and lead to better hip flexion at top-end speed.

The pause in the catch forces the athlete to absorb a lot of force to train dynamic trunk control. The more control the athlete has with a large amount of weight, the more force absorption the body learns how to handle; this will carry over to running. Having better dynamic trunk control allows sprinters to utilize the energy in a linear fashion to run faster down the track.

This is a reflexive Olympic lift. This movement trains the body how to absorb force, stay under control from a unilateral position, work through the cross extensor reflex, the stumble reflex moving forward, and help the athlete to generate more horizontal force.

The cool thing about this movement is it trains the body and helps it learn how to utilize rapid rates of coordination with dynamic trunk control through a unilateral perspective while training reflexes.

We recommend doing five or six sets of three reps on each side. This movement is absolutely phenomenal and can really help athletes learn hip extension and how to absorb force with a dorsiflexed foot into a rapid reaction with the hamstrings. Skills sprinters need.

We establish boxes at about 7” in height. A two-box clean will be about 14” off the ground. If access to boxes is not available, utilize a high hang position. The reason we like to go with the two boxes is that we like our sprinters getting loaded into the bar without a stretch-shortening cycle. In the hang, there is an eccentric loading that helps the body be stronger with the required concentric movement. Going from the boxes requires a static start. Think about being in the blocks. Sprinters can’t really utilize an eccentric portion of movement unless they want to get called for a false start. Sprinters need to think about getting tension and then igniting very rapidly.

We want our athletes to go fully into the hole with the clean. We want full depth. The movement will help the athletes be explosive very rapidly, absorb a lot of force, train their hips, lower back, and upper back to be more mobile, and when they are in the bottom position it will help them train strength to help sprinters generate power out of the blocks. So not only will the initial pull off the boxes helping with speed, power, and force development, but catching and reutilizing energy out the bottom position will help them generate power consistently to be way more explosive off the start.

We recommend doing anywhere from four to seven sets of two to four reps.

A lot of sprinters don’t learn anything about the Olympic weightlifting technique. We think it’s pretty easy to learn, especially for technical athletes like sprinters. One of the key aspects of Olympic lifts is that when coming off the floor the knees should track back to create a vertical shin angle to cause more hip flexion. We love this because it lengthens the hamstring. Training the hamstring to hold this position isometrically transfers incredibly well to the sprints. 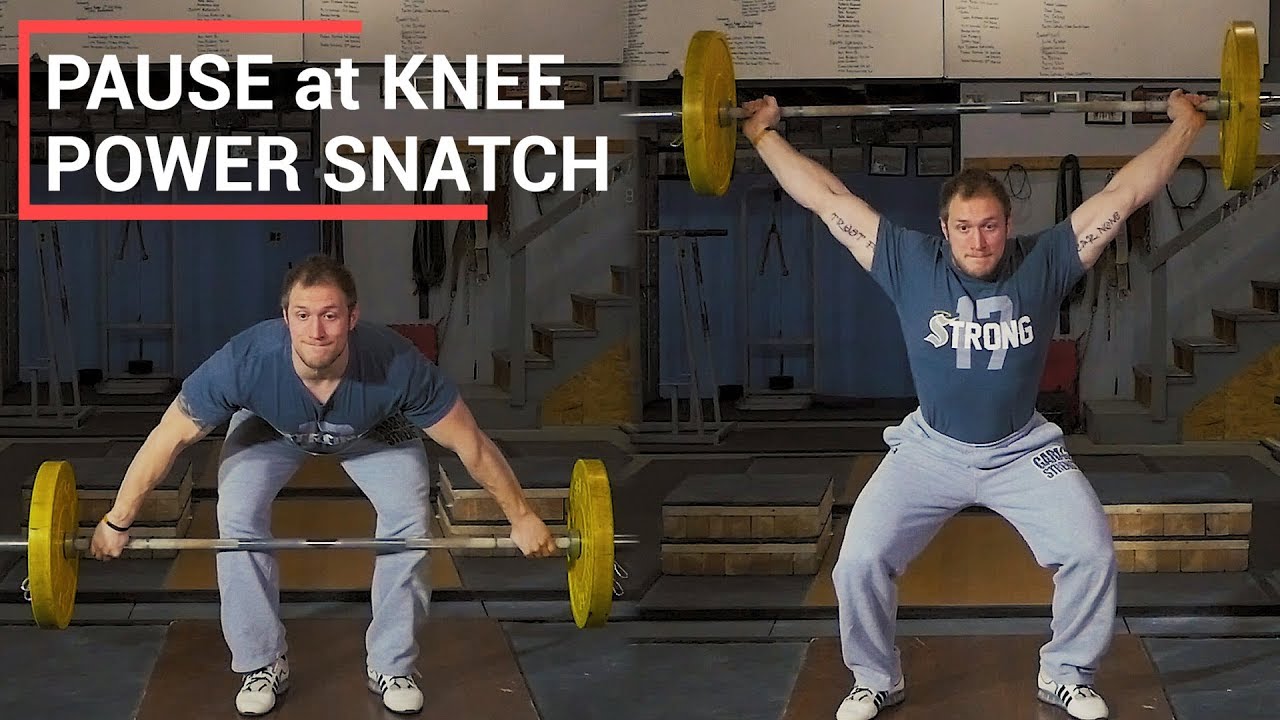 With our sprinters, we like to cue the power snatch from the pause below the knee with an auditory cue. The reason why we love the auditory cue in this movement is that the load tends to be light (relative to other Olympic lifts), the athlete will feel their hamstrings lengthen, and they have to be patient, just like when they are in the blocks. As the auditory cue is given, the athlete needs to GO, catch the power snatch after contact upon the hips and catch rapidly over head.

This movement can be done for five sets of two to four reps once a week. However, we recommend not doing this movement too frequently because it can tax the nervous system. This movement will help the athlete’s reaction and their rapid rate of coordination to help them be faster.

Sprinters need to be fast. Not only do they need to be fast, but they need to have incredible dynamic trunk control, the ability to generate vertical and horizontal force, exert power out of the blocks, and perform with a rapid rate of coordination. Thankfully training the competitive Olympic lifts, variations of the Olympic lifts, and reflexive Olympic lift movements helps to develop all of these components in the weight room. Make sure to include the movements of power clean with a pause in the catch, dumbbell drop snatch to box, two-block clean, and the pause below knee/power snatch with an auditory cue. Do this and see the stop-watch record faster times sprinting around the track.