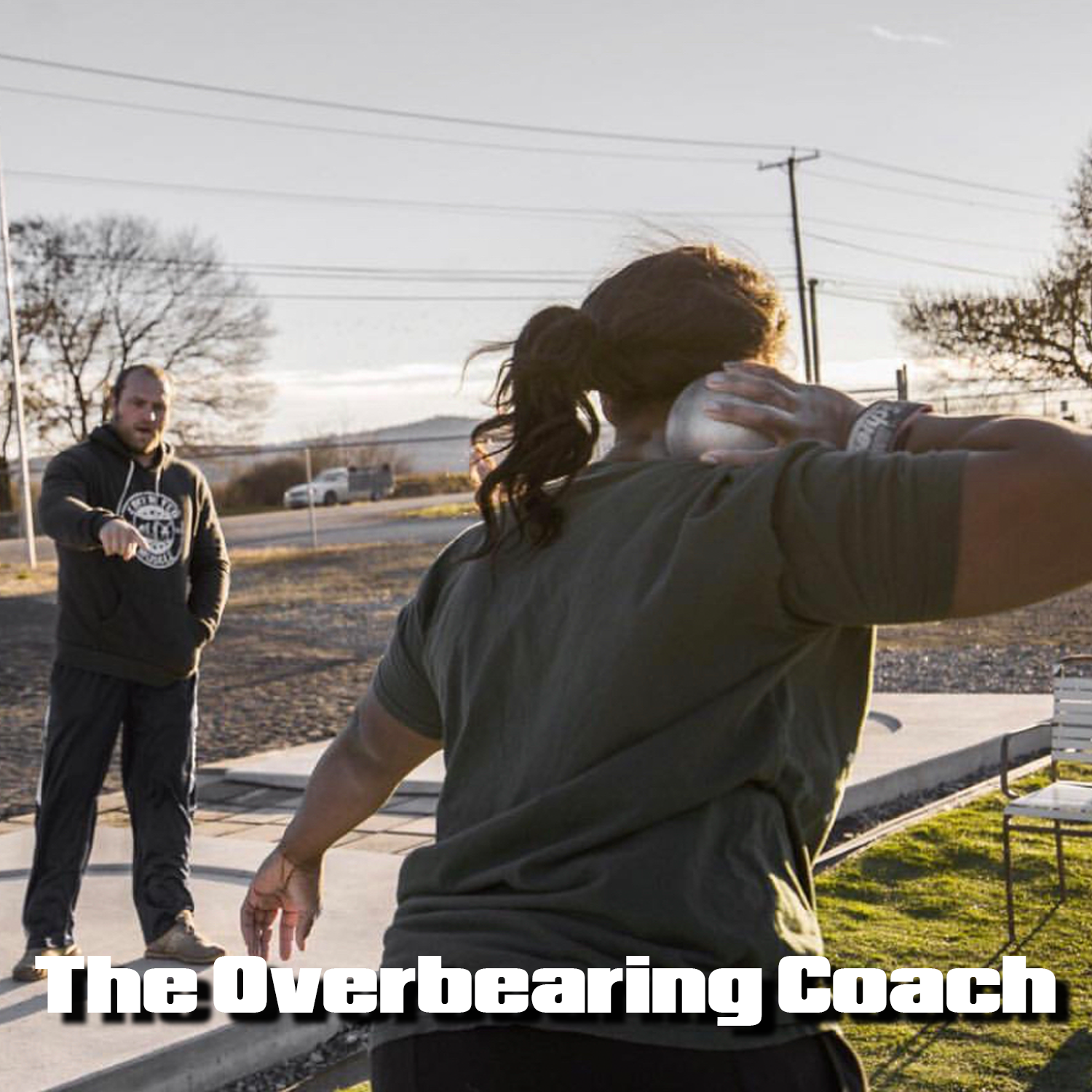 You are in the gym, trying to a get pump rolling while a monster coach is hovering over his athletes in the corner.  He comes over to strike up a conversation with the new person in the gym. The big tough coach is all swolled up, muscles blasting out of his shirt, bragging about how tough his children are, they’re going to be the greatest athlete since sliced bread or Michael Jordan. He continues to talk about how he despises helicopter parents, the new generation of kids are all babies and the average male has less testosterone now than they did 25 years ago. He continues to go on and on about parents not challenging their kids (I don’t disagree), how liberals are ruining the world and we all need to live harder lives like back in the old days.

Finally, he leaves you alone and walks back to his athletes, hovering around them, telling them every little movement they are missing, every little thing they are doing wrong, spotting them awkwardly, screaming in their face for “motivation” and challenging them to dig deep while continuing to correct their form over and over again. You take a step back and recognize a peculiar situation that reminds you of the song, “Ironic” from Alanis Morissette. He spent 10 minutes talking about the feminization of males because of helicopter parents and yet he is a helicopter coach!

During my time training under Dr. Anatoly Bondarchuk, people would comment to me about the little amount that Dr. B actually coached. I was always taken back by that comment. I never noticed it, most likely because I felt that Dr. B was coaching constantly. The system was laid out for execution and the technique was relatively understood and it was up to the athlete to execute the work accordingly. This is something that I have taken with me as a coach. Minimal comments, quiet observations, positive guidance and support, those are the keys to a healthy coaching situation. So why helicopter coach?

We all know the coaches, the abstract terms, the metaphysical comparisons, the long roundabout explanations that end up going nowhere and the constant cues. Helicopter coaches tend to have an odd sense of insecurity. They may have insecurity in the set up of their own training system, they may not fully comprehend adaptations or they feel threatened if their athlete asks a pointed question around training. To make up for their insecurity, they smother the athlete with words and motions, meaningless words to just fill space. They remind me of the people who cannot sit in silence. They are the people that are constantly talking to just...talk. Recovering as a helicopter coach...

If you identify as a helicopter coach, which if you are one, you likely are too dense to identify as such, you need to take a big step back and analyze the “over-coaching.” Revisiting the Dr. B scenario, the athletes always knew the expectations, we always had a special sense of accountability. It was an unwritten agreement, we listen to him and execute the way he wants. If we want to question him, it was usually done during his naps when he was at home and would have time to discuss and explain the scenario. The first step to stopping the cycle of helicoptering is recognizing that you are indeed a helicopter coach.

1. Recognize you are helicoptering your athletes.

Once you recognize this issue, it’s important to also comprehend that some athletes need more hand-holding while other athletes need less hand-holding. But every single athlete needs some semblance of details explained. There is a sense of insecurity regarding this coaching technique. If you are a coach who can take a step back and observe how your athletes are handling training sessions, odds are high that you have prepared your athletes very well. You trust in your system, they trust in the system and you have laid out the processes based around success. The second step is to establish trust with your athletes by educating them on the training system based on the amount of information they need for their own buy-in.

2.  Educate your athlete on your training system, teach them your technical models, educate them on the big picture goals and inform them of your expectations.

Establish keys to success within the system you are using. Communicate daily goals, communicate weekly goals and communicate block period goals. Most of the athlete/coach communication should be centered outside of the training environment. Think about helicopter parents vs. really good parents. Helicopter parents would hover around a kid if he was standing on a high box that could potentially cause injury if the child fell off the box. Really good parents instead would educate the child on why they should not play on boxes, if the kid falls off the box and injures themselves, they will learn rapidly that they either need to stop playing on boxes or they better freaking pay attention while they are playing in a danger zone. This is no different in coaching. Provide scenarios for the athlete outside of training, communicate what their goals are and what defines success and then take a step back and be an observant guide that gradually nudges them along their journey.

3.  Establish the keys to success within your system of training. Gradually guide them toward the yellow brick road, don’t be overbearing and annoying. Being Coached by the Helicopter Coach

These coaches create athletes eerily similar to kids raised by overbearing parents. The athletes become fearful, they don’t handle stress as well as they possibly can because they are confused by the individual modalities they need to be using to adapt to the specific scenarios. When the athlete recognizes their coach is a helicopter, they need to create a specific plan of action through subtle steps.

We need to remember the mindset of these types of coaches. They hover around their athletes in an overbearing manner, they provide long-winded explanations over very precise details that should be clear and to the point. Why do they do this? They are slightly self-conscious about their programming and coaching ability, even if they have good ideas! By questioning their methods, they will be offended and react in a very aggressive manner. They will feel challenged, threatened, their insides will be destroyed, they won’t be able to sleep, how DARE this individual challenge what I have created. This is why it’s important to establish questions and SLOWLY overtime question what they are doing. Constantly remind the coach you are simply trying to learn about their ideas and points of progress. If the questioning is done effectively, the coach will start to question their own coaching and over time IMPROVE their methodology.

2. Ask for technical models and big-picture strength goals based on their expectations.

If the coach can provide specific models of movement, be it via Olympic weightlifting, throwing, wrestling, football, etc...there becomes a clear cut manner of execution. As an athlete, it helps to have a model to look toward for long term achievement. This clears out any muddied waters and helps the relationship grow through a greater understanding of the sport and movement. After the technical models are created, try to find the strength goals from the coach.

“I believe if you bench X, you will throw Y.”

“I believe if you back squat X, you will clean and jerk Y.”

These blanket statements will not always be perfect, but it provides a clear direction for the athlete and the coach. When expectations are laid out, the athlete has a guide, a structure that they can follow and work toward. The coach provides the number and verbal communication immediately becomes a form of accountability. It sounds stupid and simple...because it is!

3. GENTLY provide input to the coach on their best methods of learning.

Remember, egos crack in a hard manner. When coaches here questions or challenges (I am included here), they initially have a response of terror and hatred. They want to hit their athlete, ok maybe it’s not that bad but seriously, coaches get freaking pissed. It’s important for athletes to recognize this if they are hoping to help their coach improve their ability. By gently mentioning over and over again that you learn more effectively by doing something than by constantly having your handheld, it helps the coach gradually recognize that people learn in various manners.

I equate the coach/athlete relationship in a similar manner to someone learning a trade. When it is treated as a form of apprenticeship, the coach will educate the athlete accordingly and let the athlete learn. Learning occurs through perceived failure. If the athlete fails, the coach can show them where the lesson needs to be learned and then together they can both move forward in a progressive manner. Helicopter coaches can be saved and athletes being coached by a helicopter coach need to recognize there are simple steps they can take to improve the scenario.