Developing a Division One Football Player 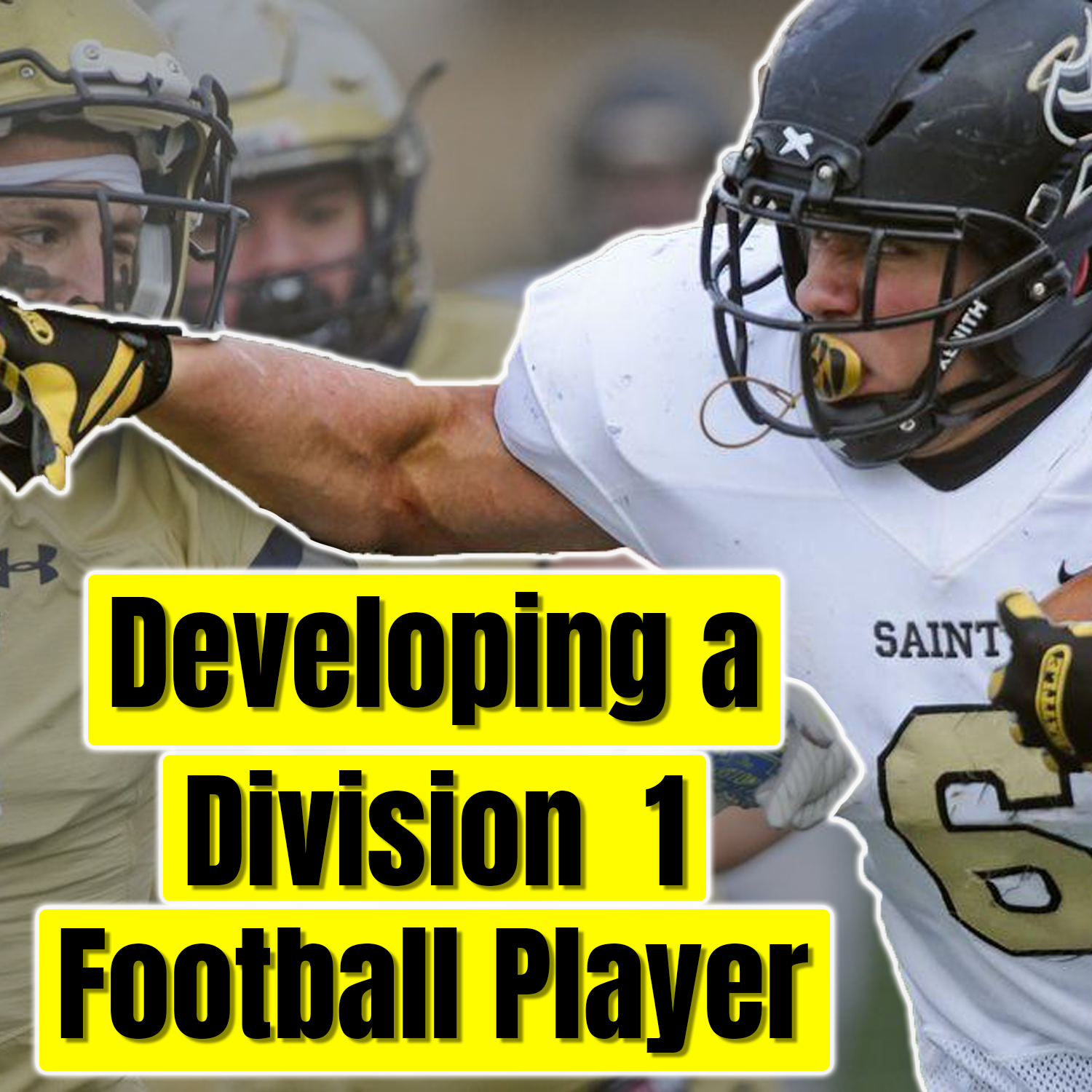 A raspy-voiced dad leaves a voicemail, “Dane, I want to talk to you about my kid. I think he has potential, give me a call and let’s see if we can build him into a freak football player.” This is a call I get more frequently than people realize. Their son has all of the potentials in the world, their daughter will dominate their competition, their kids are the best. I sat there rolling my eyes, reluctant to call back.

I vividly remember the scene. We had just bought our home and had moved out of our house and in with my parents while our farmhouse was being significantly renovated. Staring out across the farm fields at my parent's house, I called the dad back and heard the same raspy voice.

An hour later, I had Neil convinced to bring his kid to Garage Strength and start training. He told me his kid wasn’t normal, he was hard-nosed, talked a lot but worked his ass off. How old was he? He was in sixth grade, the year was 2013. Sometimes I seriously question the motivation behind parents but this conversation was different. Neil had me convinced about his son. I hadn’t met him yet but all signs pointed toward this kid being special. Later that week, Neil brought in his sixth-grader and we got to work.

Brandon George walked in the door, he was a thinner kid but tall, almost built like a praying mantis at the time. At first glance, I was not impressed by his muscle tone but as he warmed up I started to notice something special. His legs were shaking, he made eye contact with me every time he spoke, he never broke the entire workout. He could barely walk by the end, he was struggling to jump on a box because he was so fatigued but did every single possible rep without a single ounce of a complaint. My mind kept racing, maybe Brandon would be special, maybe he could do the work that Neil claimed he had the potential for.

I purposely make the first day of training as hard as possible at Garage Strength. I believe part of the significant success we have is built around the fact that we can weed many people out who don’t truly want to become champions. If the people who don’t want to be champions aren’t gone within the first week, they are gone by the end of the first month. Brandon showed up two more times that first week. Then four times the next week. By the end of his first 6 weeks at Garage Strength, Brandon was training four days a week, pushing himself, learning the Olympic lifts, learning how to jump, learning how to move, learning how to maintain his psyche. He may have broken mentally but throughout that time, I gave him challenges that normal high school kids find struggle, Brandon seemed to embrace the challenges, he seemed to get better.

I purposely make the first day of training as hard as possible at Garage Strength. I believe part of the significant success we have is built around the fact that we can weed many people out who don’t truly want to become champions. If the people who don’t want to be champions aren’t gone within the first week, they are gone by the end of the first month. Brandon showed up two more times that first week. Then four times the next week. By the end of his first 6 weeks at Garage Strength, Brandon was training four days a week, pushing himself, learning the Olympic lifts, learning how to jump, learning how to move, learning how to maintain his psyche. He may have broken mentally but throughout that time, I gave him challenges that normal high school kids find struggle, Brandon seemed to embrace the challenges, he seemed to get better.

Football came around, then basketball, Brandon continued to smash lifts four days a week. This continued through his entire middle school career. By the end of 8th grade, I had guided him to start competing in the shot put and discus as a supplement to his football and basketball career. He started to be freaky strong. The commitment wasn’t just from Brandon either. His mother would drive 45 minutes from home to drop him off at the gym, his dad would bust his butt from work or coaching to get Brandon after a long training session. Frequently, they would send me pictures of Brandon passed out in the back after a hard days work at Garage Strength.

The best thing his parents did was show support through their actions and by bringing him to train in sixth grade. By the end of 8th grade, Brandon was over six feet tall. He was long, still thin but packing on muscle. He grew into his body quickly because of the training and work ethic. Young kids that are extremely tall or long tend to struggle with coordination, especially if they aren’t involved with resistance training. Brandon was the contrary, he grew into his body fast enough that by his freshman year he was part of the varsity football team, contributing on multiple fronts. Work ethic, consistency, accountability, these are all things Brandon succeeded with on a regular basis. The simple stuff that everyone finds to be challenging, Brandon held close to his development. He’d ask me what he should eat, “12oz steak, milk, potatoes, and greens.” Every day he’d come in and share what his mom made and how much food he ate. He would take that open-mindedness with everything. Learning snatch technique, bench press technique, pull-ups, etc...you name it, he asked the questions and took accountability for his movement. He began to see things as an athlete that most adults couldn’t see.

During the summer of 2016, Brandon demonstrated something pretty freaking cool. We had an Olympian discus thrower staying at the gym as he and his coach planned to head to Rio. The Icelandic Viking thrower and his coach came in and trained twice a day for four days. Brandon wanted to be there every time they were training. I gave his parents the schedule and he was there. He was listening to everything the coach said, watching the discus throwers response and taking note of their interactions. This was during his ninth-grade year. Imagine that, a young kid asking questions, taking note and making those improvements. Those are the aspects of athletics that everyone misses out on. Does being a freak physical athlete matter? For sure, but what matters most is the ability to learn and apply those lessons to performance.

As Brandon aged through his sophomore, junior and senior year, his mental prowess began to shine with his physical ability. He’d show up every single damn Sunday to train. Now training five days a week, throwing three days a week and working on speed work, mobility, eating well, lifting heavy, Brandon became the total package. His lifts became absurd. He has nearly a seven-foot wingspan and could still bench press 185lbs for over 30 reps and by the end of high school, that turned in 225lbs for 25 reps. His stride’s got longer and longer on the field, his speed showed and the sound of him hitting other players became brutal. The punishing noise was nothing short of impressive. These numbers are freakish but they don’t compare to the accountability and consistently that Brandon upheld. People often ask me what separates athletes like Cooper Lutz (Syracuse), Brandon and Nicholas Singleton (5-star recruit) from other athletes. Why have they been so incredibly successful? Each one of these studs has trained consistently for 5-6 years. They RARELY if ever, made excuses. They learned how to handle stress at a very young age. Most importantly, they learned how to learn! Consistent accountability is difficult for adults, let alone young athletes. When there is a total buy into a training system, the results come soon enough!

Brandon was special in the fact that he also embraced track and field and basketball (much to my chagrin, lol). Brandon medaled at states in the discus (second) and placed fourth in the shot put (58’ bombs)! He learned how to channel his strength into power and speed. Brandon was highly recruited by many different universities. I had Division 1 college throws coaches banging down my door to convince Brandon to attend their school for football and track.

Now we see Brandon George in his freshman campaign at Pitt. The confidence behind him has been cultivated and developed since he was in sixth grade. The lessons he embraced over those six years of training have carried him to the highest collegiate level of football. He will continue to develop his skills, continue to embrace challenges and continue to become an elite athlete. I am incredibly proud of Brandon, to say the least. Brandon has been an example for countless kids at Garage Strength and at Berks Catholic. Brandon George is a BEAST!