A lot of athletes have traditionally been trained in the world of powerlifting. They have spent a lot of time performing bench presses and variants of that lift. Great lifts. Athletes have learned how to move a lot of weight utilizing the bench press. However, one of the downfalls behind the world of powerlifting is that sometimes it doesn’t do the best job training the most explosive athletes.

By training throwers, we have been able to see how the most explosive athletes can be developed through different Olympic weightlifting variations. It is important to understand that Olympic weightlifting is the movements of the snatch, clean, and jerk and any of their variations--power snatch, push press, power jerk, or a clean off a box for a few examples. We also categorize reflexive lifts, like a drop dumbbell snatch to a box, as falling under this umbrella.

Noticing that all of these movements are done very rapidly, through a long plane of acceleration, and require a ton of coordination. Coaches can see how the difference in speed can improve an athlete’s explosiveness and also lead to greater strength gains because the athlete learns how to recruit muscles effectively.

4. Behind The Neck Jerk

We recommend performing the behind-the-neck jerk from boxes. This movement can be performed as a power movement or a split jerk. One reason we love this movement is that it requires the athlete’s trunk to be extremely tense and the upper back to be extremely tight. This transfers to an explosive upper body because it teaches the upper back to retract the scaps. Then when the athlete drives very quickly into the split position, their triceps, lats, traps, and shoulders all work together to stabilize the weight overhead.

Athletes may have upwards of 500+ pounds overhead. When we have had discus throwers to this movement with that much weight, they have been learning how to manipulate that speed and transferring it over to the bench press. Next thing the athlete is benching over 500 pounds because there are more mobility and stability in the upper back, so now when the athlete takes the bar off the rack for a bench press they can be more dynamic, more explosive.

We recommend doing this movement once or twice a week with jerk boxes. Do five to six sets for two to four reps.

From the high hang position, perform in succession high pull, high pull, snatch! This movement will build the biggest traps ever seen. Athletes will get yoked.

When we talk about having an explosive upper body, a key factor is having effective use of the traps and everything around the shoulder girdle--the rhomboids, scaps, and everything else. The two pump forces engagement of the upper back. The eccentric load may be very heavy as well which will overload the nervous system, getting it to fire even more. Now when the athlete performs the snatch, the upper body is alert, awake, and learns how to rotate very quickly, stabilizing the shoulder girdle through co-contractions through the lats, shoulders, and delts. The shoulder is now more stable and is learning the co-contraction skill performing this movement.

We recommend doing this movement once a week for five sets of two pumps and one big snatch.

The first person we ever heard about a muscle snatch being used to train the upper body came from Charles Poliquin. He talked about lowering the bar slowly before turning it over to return back to the floor.

The muscle snatch is performed with no contact. The movement requires a big upper body finish to rotate the bar overhead. This teaches the upper back how to externally rotate effectively. It will also improve the athlete’s mobility. This will open up the pecs and the upper back, lengthening the pecs. As we like to say at Garage Strength, lengthening is strengthening.

Slowly lower the bar after executing the muscle snatch before flipping it over, a lot of the load gets put on the triceps and the deltoids. Lifters have to coordinate their gut with their triceps and shoulders. This will overload the triceps. Having explosive triceps is key to the world of sports performance. The stronger more explosive the triceps are, the faster the athlete can extend the elbow.

We recommend doing this movement two days a week for four to five sets of three to five reps.

1. Behind The Neck Push Press

This movement is very similar to the behind-the-neck jerk. But a key difference with this movement is there is a long drive with the push press from the triceps. Athletes learn to open up their chest, have retractions and tension in their thoracic spine, and once they start dipping to accelerate the bar rapidly, they have to coordinate their gut for a strong foundation. The athletes drive as long as they can with their legs, their triceps are finishing the lockout. This takes a lot of recruitment to finish that extension with that much weight from the triceps and the deltoids. 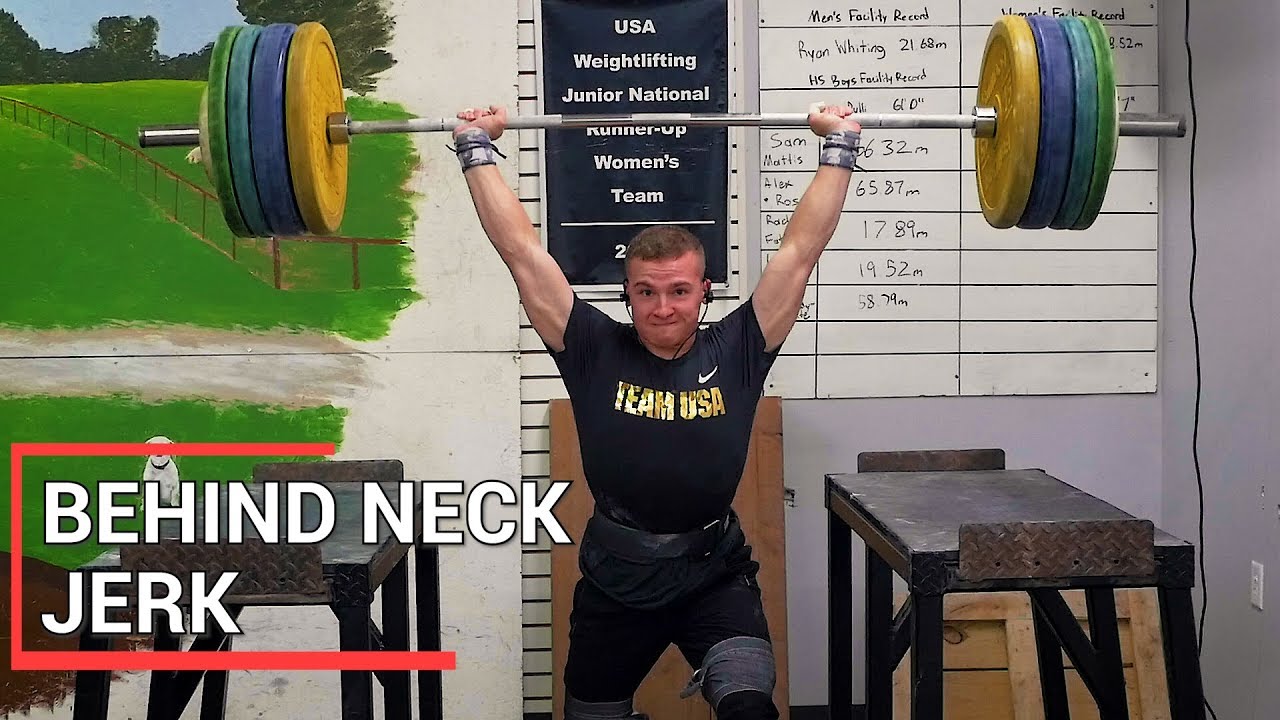 An explosive upper body is necessary to compete at the highest levels in sport. Utilizing the above movements will not only teach the body how to coordinate muscles for co-contractions but will strengthen the muscles with enormous results. And yes, strong muscles are great, but explosive muscles that move rapidly are better. With that being said, implement the behind the neck jerk, two pump snatch, muscle snatch with a slow eccentric, and the behind the neck push press to not only get stronger but enhance the explosiveness of the upper body muscles.