But it also might come rotational direct isolated rotational core work. So…ab work that will be done in an explosive fashion from a rotating pattern or a direct linear pattern. It is also okay to recognize that when training explosive core work, a lot of the exercises will be full-body movements. We also need to remember it is okay to isolate the abs.

Rotational aspects for sports like field hockey, lacrosse, shot put, or discuss, we can learn how to utilize all of these rotational movements for any sport we are rotating while running, like football or soccer. All of these movements will give us better dynamic trunk control.

It goes without saying, but all of these exercises improve various aspects behind dynamic trunk control for superior athletic performance.

To perform this movement, hold the barbell over the face. The legs are in a hollow body-type position. From there, we want to explosively crunch up while bringing a single knee to the chest. Upon beginning the eccentric, remember to slow the descent down. This will create greater time under tension for the abdominals. We will alternate which knee is brought to the chest every rep. 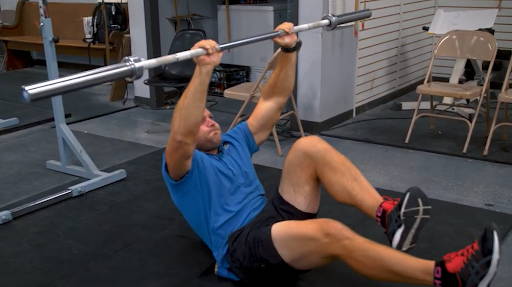 The big factor with this movement is that a lot of this explosive work in this movement helps with hip adduction while holding the explosive trunk. This is typically a hockey player movement but carries over well to sports that involve the drive phase and acceleration while running (which is pretty much every field sport).

Do this for two to three sets of twelve to twenty alternating reps.

To perform the movement crow-hop with a crossover step into a foot plant and throw. The whole point is to have a deep rotation and explode into the throw.

Ideally, we want to hit the movement five to seven reps on each side. As the weakside becomes more explosive, the dominant side will reap the rewards as well and be able to exert serious force. Do this movement for two to three sets.

Think about the gut, the trunk, we want to think about what it interacts with and how it incorporates other muscles in that region. If we have our whole sheath of a gut engaged, we know there will be hip flexion as we drive our knees up–think about running and picking the knees up high. That is where this movement comes into play. It directly correlates to speed. It also helps with deceleration.

The way we set this up, we take our PowerLastic band and wrap it around a dumbbell. We then put our feet through the loops at the ends of the PowerLastic band. We then hang from a pull-up bar. Make sure to have tension established forward right away. We then drive the knees up in an explosive manner. Again, control the eccentric at a slow and deliberate pace. 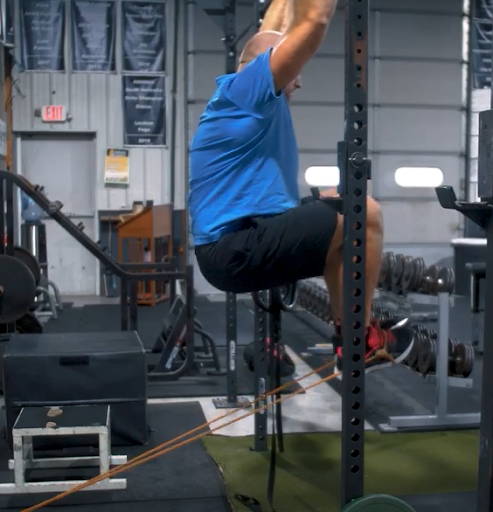 The foundation for this movement is actually established through the hands and the lats. This provides that good tension to the feet. The raising of the knees rapidly, keeping the feet forward, squeezing at the top giving us a rapid muscular action followed by a slower eccentric.

Do this movement for two to three sets of seven to ten reps.

This is another rapid core exercise. This movement is all about force absorption. Athletes who can absorb energy can use it more positively. 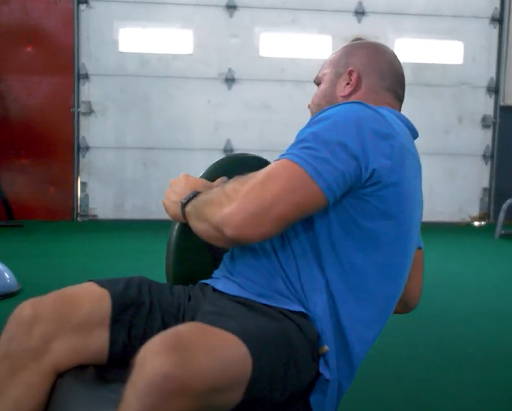 The whole goal of this movement is to absorb the energy as well as possible through the hips and trunks. Holding the isometric action and rapidly bringing the plate, or any object, to the trunk either linear or rotationally really, really helps the body learn how to apply a ton of force at high speeds from the abs.

This is an explosive unilateral movement. It is similar to the bicycle abs from the beginning but we utilize one arm at a time. Now we prefer to do any type of v-up on a bench because it forces athletes to get up off their lower back. A lot of athletes who struggle with stability in the trunk never actually come up on their butt. The bench forces more muscular action from the gut.

Holding the kettlebell in one arm, we want to bring the opposite leg up and explode. As the body becomes more coordinated with the movement, we can rotate the elbow to the knee. Do this for two to three sets of five to seven reps on each side. 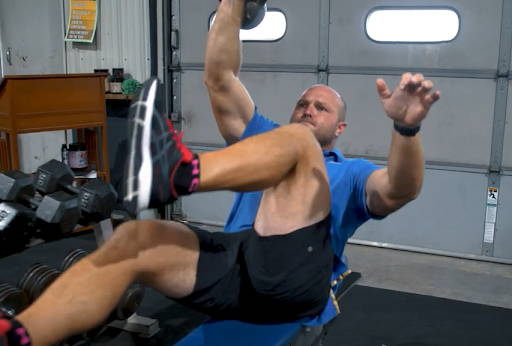 The whole point is seeing left elbow to right knee and right elbow to the left knee. They need to come together quickly. Be patient with this movement and start light. Beginning with a five-pound dumbbell is fine, working the way all the way up to a thirty-five-pound kettlebell.

We mentioned it above about people saying abs are a slow-twitch muscle. This doesn’t mean they should not be trained explosively. Abs are an everything muscle. They are endurance-based because they keep the trunk upright all day. Abs are used in an explosive manner in coordination with other muscles anytime athletic endeavors are taking place. This means training the abdominals in both manners has merit. Just if we want to play sports, which demands explosive movements from the body, we need to keep in our training explosive movements. So go ahead, try these five exercises out, give them a whirl and let us know how it goes by commenting below.