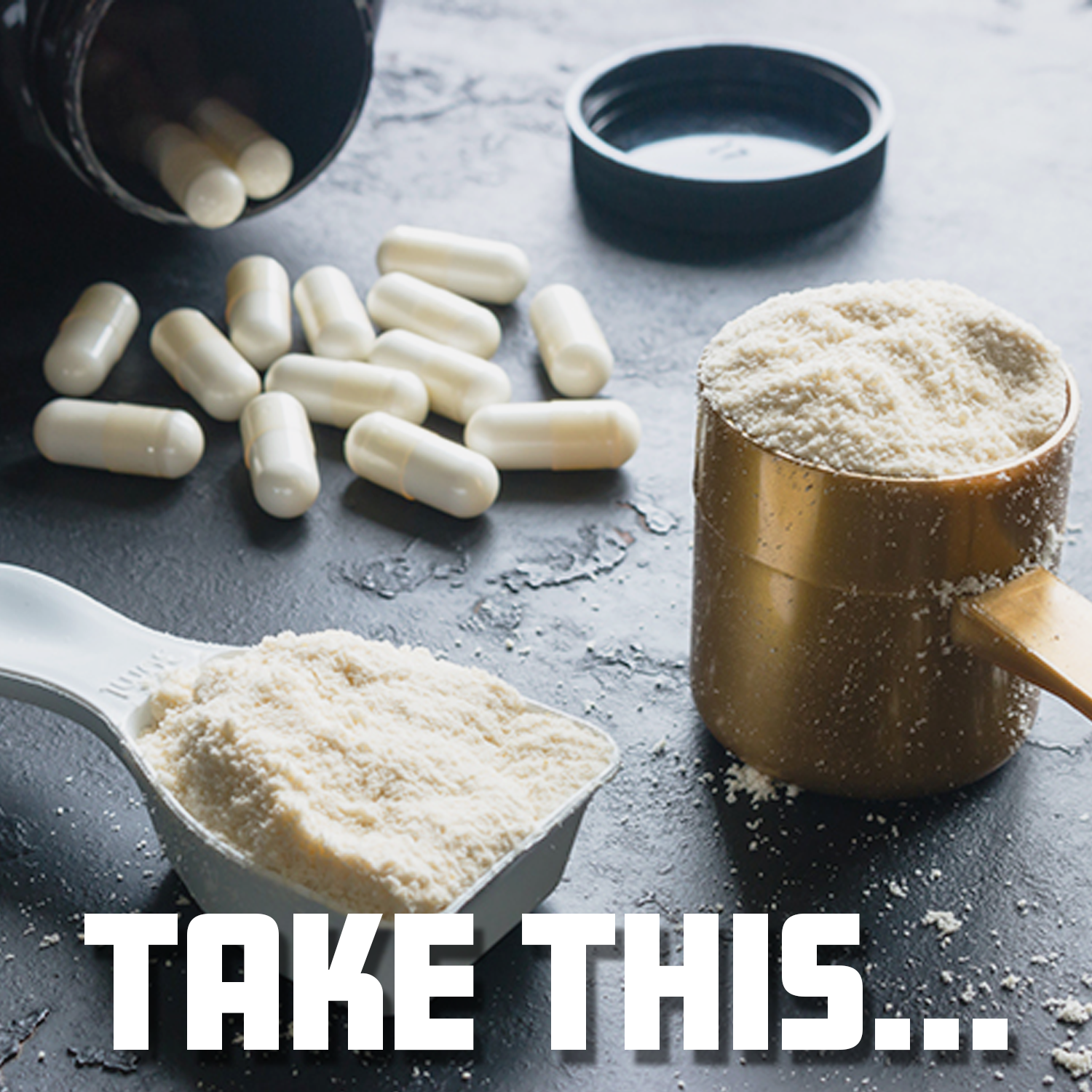 It was the year 2000. The Y2K scare had just come across the nation, people thought jets would fall out of the sky, computers would implode and creatine was the devil’s lettuce, or shall I say powder? I was deep into training as a 16-year-old, smashing weights on a prison bench in a cold gym, Miller’s Gym as it was known at the time. My Dad had just purchased a set of bumper plates for me for my Christmas gift and my brother and I were in the Garage (the future home of Garage Strength) smashing power cleans and incline benches. This was when we first started using creatine. My dad had done deep research on the supplement and found it was quite effective at increasing muscle mass and power output, so he did what every responsible parent should do, he got us on creatine, recognizing that there were ways to take advantage of the 5 days a week we spent training by ourselves in the cold Garage.

Over time, people started to claim my dad was giving us steroids. Not just any old steroids, we are talking about THE steroid. The steroid is known as creatine. We were stronger than everyone in school, very explosive and had massive triceps (thanks to miracle gro’s) but everyone kept saying we were taking steroids. After a while, I started to wonder if creatine was a steroid? Did it make me so anabolic that I was cheating? Well, the story ends in the fact that creatine is a god damned amino acid. That’s it. We weren’t freaks of nature because we were on creatine, we were freaks of nature because we were training in a Garage five days a week without heat in the depths of a cold Pennsylvania winter. Fast forward nearly two decades and here we are today.

I just finished up a one hour podcast with one of the best creatine researchers in the entire world, Dr. Scott Forbes. Dr. Forbes is a professor in Manitoba, Canada. An intelligent dude with a researchers passion influenced by a competitive athlete’s background. That took him deep into the world of creatine. Can creatine help with cognitive ability? Can it help the geriatric world? What’s the best way to take creatine? Should it be loaded? How many grams should be taken a day? What’s the best time to dry scoop the powder? Should it be cycled on and off? Does it help with concussion recovery? Hell, could it have a positive impact on breastfeeding mothers (shout out to Caitlin, I love you)!?!! These were just a few of the topics we covered as we dove into one of the most enjoyable nutrition conversations I have ever held.

Let’s start with the simpleton stuff. What the hell is creatine? In basic form, creatine is an amino acid. It is an amino acid synthesized from methionine, glycine, and arginine to form creatine. IT IS NOT A STEROID. IT IS NOT BANNED BY THE NCAA. I think for the remainder of this article, I will type in caps regarding all of the annoying misconceptions that people have garnered over the years. What it comes down to, creatine is an amino acid found consistently in muscle meat but also used by our body to facilitate the recycling of ATP, the energy currency of our cells. Creatine initiates ATP usage, it also has been shown that when muscles are saturated with greater levels of creatine that they are able to produce more power and will ultimately lead to greater size and increased levels of strength. For more information on the basis of creatine, I suggest researching creatine and phosphocreatine system.

One of the topics I discussed with Dr. Scott Forbes was entirely based around where many of the myths of creatine may stem from. As I have researched the topic since I was 15 years old and am constantly bewildered by what parents ask me regarding the amino acid, I decided to discuss this with my dad and other athletes that grew up during the creatine boom in the ’90s. The general consensus? People are fu$king idiots. My conclusion still goes back to a handful of baseball players that were smashing the home run records in the mid to late ’90s.


My first popular exposure to creatine was in an article Sports Illustrated did on Mark McGwire while he was smashing the single-season home run record that Roger Maris held for quite a long time. McGwire mentioned using creatine as part of his training regimen to get him over the 60 barriers for the single-season dinger record. It came to be known later that McGwire was smashing Andro and taking rampant amounts of gas (steroids for the normal people) to crush the home run record. This became a guilty affiliation and a black eye on creatine. People run with it, Fox News shits on it and everyone believes creatine is the devil and all of a sudden, Donald Trump is President. Ok, I took that a little too far but seriously, that’s how one of the greatest supplements on the planet gets a negative connotation.

What does it do?

Most of you are here to figure out, what the hell does creatine monohydrate do and how can I use it to get me freaking swole? Outside of caffeine and whey protein, I believe it is the most researched supplement on the market. It also happens to be the safest, with next to no negative adverse effects. Some people occasionally complain of gastrointestinal distress, only for it to be alleviated when they decrease the dosage and slowly raise it back to proper amounts. This is a supplement that can help older people, it can help the general population increase their overall health, it can help recover from concussions and it can dramatically increase sports performance. This is no joke!


In various studies, scientists have found that individuals taking creatine and partaking in resistance training have a statistically significant increase of muscle mass, muscular strength, and power output when compared with athletes utilizing resistance training but NOT using creatine. That tells us right away, get on creatine if you want to increase muscle mass, strength and be swole. Studies have shown that the rate of force production has also improved in comparison. That means applying force FASTER than another individual will put you in an advantageous position. Get that creatine for quicker reaction and explosiveness.


But I heard it causes cramps, makes me fat and can hurt my kidneys long term? NOPE, quite the contrary. Studies on collegiate athletes have shown the opposite to be true, use creatine and you will suffer fewer cramps and fewer muscular injuries. Why? Water retention and something known as myogenetic regulatory factors. Water retention is positive because of growth factors that lead to increased recovery and trauma protection, the same mechanism that also may be responsible for faster recovery from concussions when supplementing creatine. Dr. Stephen Forbes has also found that subjects lose about a half kilo of total fat mass when all nutrition aspects are equal while gaining about 1.5 kilos of muscle mass. That’s a 2-kilo swing in favor of lean muscle mass, a great indicator for sports performance AND cardiovascular markers. My kidney’s will get crushed, right? Again, wrong. Researchers have studied some subjects on creatine for over a year and have seen no negative impact on anything when using this potent supplement.

What can we do?

The question becomes, how can we take it, how much, when and should we cycle it? Let’s start with the quantity. I informed Dr. Forbes I would take 10+ grams of creatine a few times a day during my loading phase and then continue to smash over 10 grams a day for maintenance. He didn’t completely make fun of me but basically said research has shown that .1g/kg body weight is an effective dosage. So, if you weigh 220lbs or 100kilos, taking about 10 grams a day is actually ok. Most research is done with 3-5 grams a day after a 20g per day loading phase and serious benefits are still seen in power output. Science says 5-10 grams a day is fine, I’m an illogical meathead and will likely continue to crush 10+ grams of creatine daily, simply for the placebo effect.


What about cycling on and off creatine? Does that make sense? This answer floats around in a contextual world. Understand that different athletes need different sporting qualities for optimal performance. Essentially, if you are a power athlete there is not much of a reason to cycle on and off creatine. It enhances hypertrophy and strength and power output, why cycle off? Now, if you are an endurance athlete, that answer lies in some muddied water. It certainly makes sense to use creatine during preparation phases as it can help tremendously with recovery. Fat mass can decrease by about a half kilo but muscle mass can increase by 1.5 kilos over 2-3 months time. This is where context comes into play and having a coach with half a freaking brain becomes necessary. It comes down to the coach and athlete determining if the extra mass is beneficial for optimizing sports performance.


My recommendation..if you are an 800-meter runner, 1500 meter runner, a sprint cyclist or wrestler, then you should continue to smash creatine. If you compete with significantly greater levels of endurance within your sport, it is likely that you should taper off creatine during a peaking period because of the weight gain. 
This amino acid can slow down sarcopenia, it improves cognitive abilities, can have a positive impact on cardiovascular markers and can dramatically increase sports performance. By understanding timing and recognizing its potency, many athletes and general population individuals can benefit tremendously from creatine monohydrate!